My take on the budget

Posted on July 12, 2015 by itsgoodtobecrazysometimes

I think if you read through a lot of my posts, you may well figure out that I am not a fan of the government. Of any government to be honest. But I also think they are necessary and being British we do enjoy complaining about them, its part of what makes us British, but this budget has made me want to pack up and leave the country (this would assume I could leave my own house.) I think it is basically a chocolate covered turd and the more you dig the smellier it becomes. Not sure how that works for an analgery but I am going to run with it. 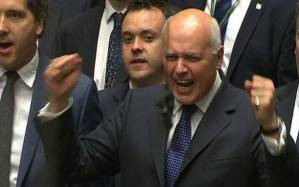 As I have been told this is him celebrating living wage. I borrowed this quote from someone else “Living wage calculated as £7.85 outside London, £9.15 in London. Osborne announces £7.20/hour and cuts tax credits.” So way to celebrate IDS.

And as far as I am concerned this living wage is the chocolate. Don’t lets get me started on the massive tax credits cuts, which doesn’t just effect the unemployed, but the working families who need that Living wage. The two children, when we became China I am not sure (yes maybe a bit of conspiracy theory happening there) I object to this again for the simple reason, they are tried to say its because people on benefits keep having children. Pffft the largest drain is the old people and pensions, so maybe we should just shoot all people over 75. And as for the exceptions, the chancellor wants woman who have been raped and are having a child to prove they have been raped. God knows how, considering Rape, is one of the few crimes where the victim is made to blame.

Student loans, instead of grants, way to screw our young but wait if their parent’s have a house worth 1 million then they have just made massive savings. (this would be sarcasm)

The only thing I think I did agree with, but this is because its the one thing I haven’t gone into is people in social housing earning 30k or more is going to be asked to pay market rent. I do believe social housing is for those really in need. But I am sure at some point when I look at it I am going to find more chocolate cover shit.

Then to add insult to injury, the Labour party. The party for the people has come out and said they are not going to oppose the budget, because this is what the people wanted. Not one of my friends is happy, infact for the majority of them they are all going to be adversly effected by this budget.

And lastly, fox hunting.why the hell does this government want to bring it back. You know what I would personally pay good money, to hunt David Cameron. In fact I think a large amount of people would welcome fox hunting back if once a month, “the poor” could hunt an MP in the same way. I am sure I could get people to back meeting up, drinking wine and then jumping on a horse with a pack of dogs to hunt David Cameron.

I may well pitch that

Like Loading...
This entry was posted in Benefits, government, welfare state and tagged budget, election, government. Bookmark the permalink.